Join us at the College of Idaho to meet the Chief! Chief Rex Ingram is the new Chief of Police for the Caldwell Police Department. He will be giving an update on what's going on in the Department and projecting what the future will look like for Caldwell's police force.

On July 1, 2022, Rex Ingram began his career with the Caldwell Police Department when he was sworn as our Chief of Police.

Chief Ingram was born in Los Angeles, California and was the middle child of four children. After his birth, Chief Ingram spent the following five years of his life in Cabo San Lucas, Mexico until moving back to the Los Angeles area. Chief Ingram attended public schools and began his public safety career as a law enforcement Explorer, serving with the California Highway Patrol as a teenager and young adult.

Chief Ingram worked as a young patrol officer in South Central Los Angeles and later as a Youth Service Officer where he mentored at risk youth, gang members and developed relationships with the community while coordinating youth programs for the City of Los Angeles.

Chief Ingram was selected to work a citywide violent crime suppression unit where he developed a passion for gang reduction and youth development while focusing on reducing the most violent crime in Los Angeles. Chief Ingram was later selected and assigned to a Gang Enforcement Detail and was recognized as an expert witness in Hispanic and Black gangs by the Los Angeles County Superior Courts.

Chief Ingram was recruited to work as an undercover investigator and training officer in the elite Hollywood Vice Unit, prior to his selection to Internal Affairs. While assigned to Internal Affairs, the Chief notably was credited for co-authoring the Departments “Green Book,” a guide for supervisors to conduct complaint investigations.

Chief Ingram has been recognized numerous times for his commitment, organizational and motivational skills, and has been chosen to lead hundreds of officers during times of civil unrest, special events and high-profile visits to the city.

Chief Ingram possesses a Bachelor of Science degree in Criminal Justice Management from Union Institute and University. He has attended the prestigious USC Executive Leadership Program, and has graduated from the Pepperdine School of Law - Dispute Resolution Course for law enforcement managers.

Chief Ingram has over 7000 hours of formal law enforcement training, is a POST certified Instructor and has overseen the LAPD Watch Commander Leadership Cadre and has been an instructor for various leadership schools.

Chief Ingram was an active member of the Latin American Law Enforcement Association and the Oscar Joel Bryant Foundation.

Chief Ingram has lived in the Treasure Valley for the past two years with his wife, Venissa, and their two sets of twins, one set of boys, and one set of girls. He is very active in the community, volunteers his time in the classroom, coaching sports and enjoys spending time with his family both at home and in the great outdoors." 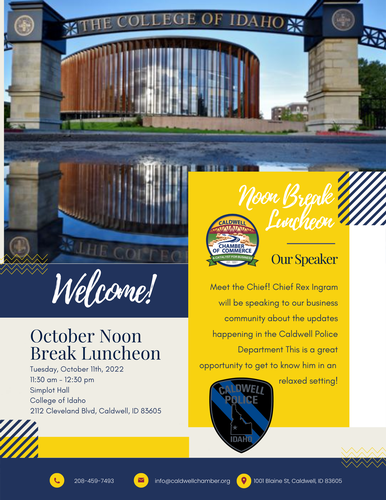